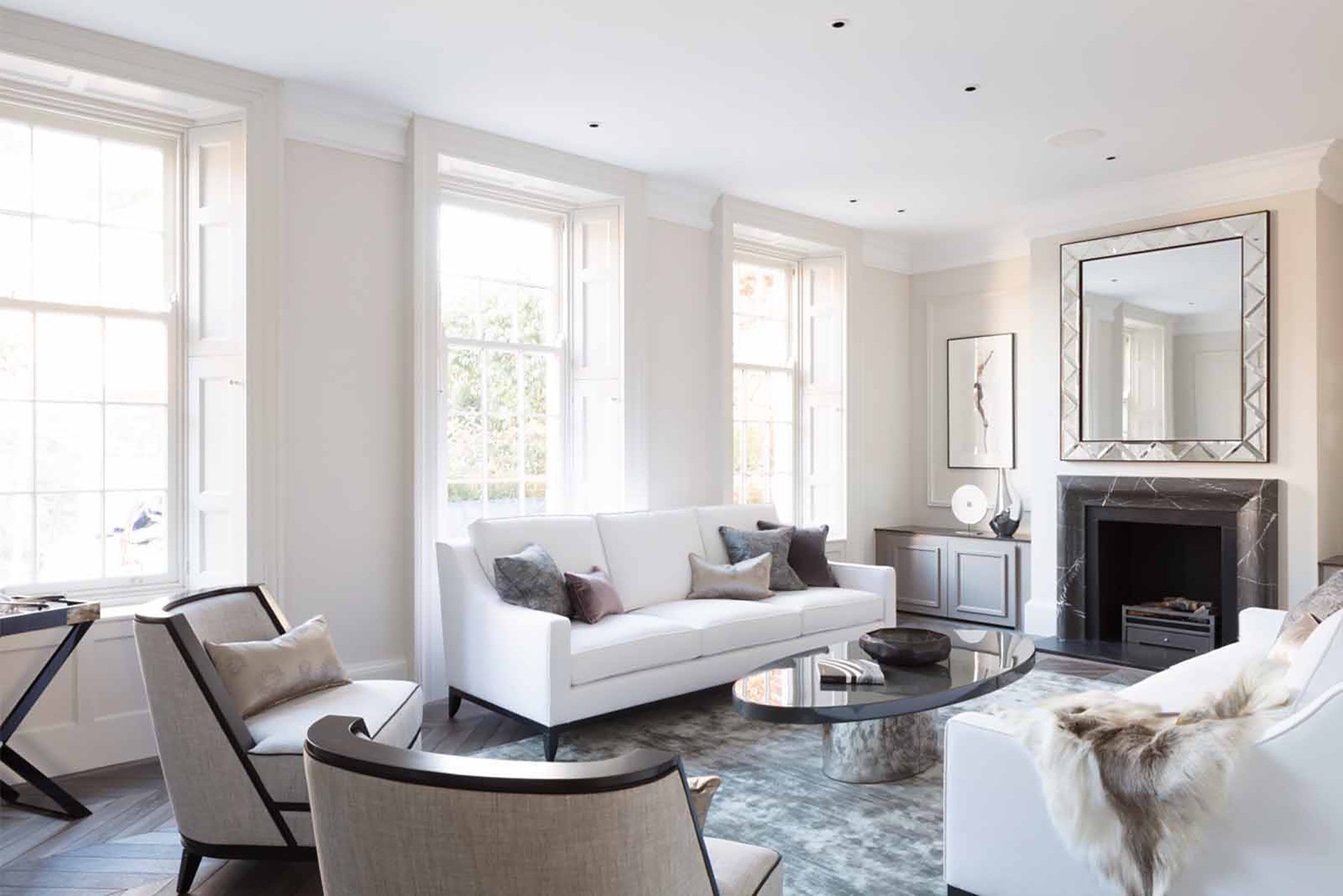 The brief for the interiors of the 970 sq m (10,440 sq ft) 3-storey house was for a modern design offering a stark contrast to the building’s exterior that would suit all occasions; a house to live in, entertain in and indulge in. The concept has therefore been driven by this relationship between contrasts with a narrative that uses the constant interplay of opposing forces, whilst paying homage to the archetypal bond villain: the modernist architect. This relationship has been famously derived from Ian Fleming’s distain of modernist architecture resulting in perhaps his most famous villain, Goldfinger.

The marble clad grand Entrance Hall focuses on the cantilevered limestone staircase, which follows form of the curved polished plaster feature wall. Complete with a stunning crystal chandelier it sets a scene that would be well placed in a Chelsea townhouse. The house and internal layout is classical in proportions and symmetry yet unyielding in revealing its secrets that lie beyond.

The formal Living and Dining Rooms sit at the front of the house marking the threshold between classical and contemporary aesthetics. These rooms have been designed in a purist fashion for the adults to retreat and enjoy in a child free zone.

The Powder Room has been designed as a dark, cavernous, hermetic space featuring black mother of pearl wall tiles, black joinery, walls and ceiling. The Media Room is also a dark, sultry space that invites one to retreat and indulge. The journey through these individual spaces culminates in your arrival at the heart of this modernist lair: the super sleek, contemporary open plan living area. This includes the Family Living and Kitchen leading through to the Children’s Playroom on one side and the Utility Room and Boot Room on the other. The client wanted a clean, modern, show-home aesthetic whilst remaining functional and child friendly. A marble clad feature wall with corner fireplace and recessed TV embodies the desired aesthetic whilst the minimalist Dada kitchen is both modern and functional. It has been meticulously designed in a modular formation to fit within wing walls and for sections to be concealed within pocket doors.

The first floor takes a more balanced contemporary approach dominated by the large Master Suite which is south facing, with a tree lined vista of the landscaped garden beyond. The adjoining his and her Dressing Rooms and En Suites have been designed as opposing yin and yang spaces with matching specifications, yet contrasting colour palettes.

The second floor completes this spatial odyssey with a huge skylight above leading onto the Library and Reading area with a Study and Guest Bedroom beyond. The unveiling of unique and surprise elements continues within the Library walls, where a secret door leads into the ultimate sanctuary - a Games Room, Gym and Steam Room. A cunning design feature that even James Bond himself would be impressed with.

In conclusion, this house has been carefully crafted to meet and exceed the requirements of the client. It has been finely tuned with opposing forces that define, complement and ultimately balance one another. It has been a stylistic delight of contrast and surprise that fundamentally teaches one to never judge a book by its cover.

The clients' response to the completed project was: “Ayanthi and Mia swiftly helped me to plan out the function of each space and to establish a clear and articulate brief for the interior scheme which they saw through meticulously. The project has been a complete success; having lived in the house now for several months each of the spaces works so well individually and collectively - there is a great sense of cohesion in the property and most importantly it feels like 'home'. Perhaps the greatest compliment I could pay is to say that there is nothing I would change and that really is saying something!”