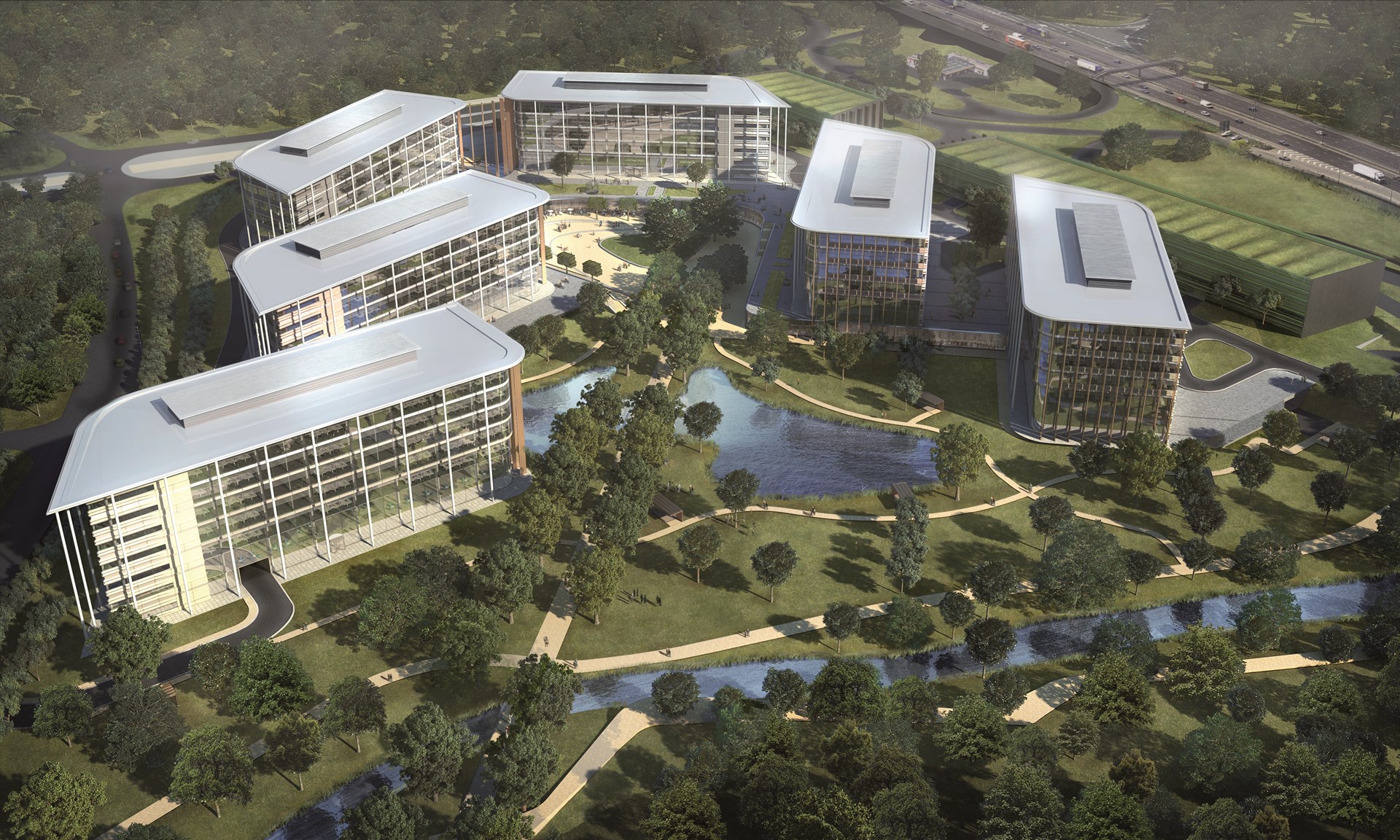 Scott Brownrigg is developing business expansion strategies which will take the practice to key, select parts of the globe. Whilst these will enhance our international reputation and profile and strengthen the design excellence of our UK base, each location has its own distinct climatic challenges which require unique architectural strategies and environmental responses.

Here, we look at three projects in Russia, Bahrain and Malaysia that outline such strategies and offer design solutions that are not only responsive to the aggressive climates in the three locations, but acknowledge the context, cultural, social and historical precedent for designing in these places. These are not wholly reliant on contemporary environmental techniques, but are a more sophisticated synthesis of the two.

The first, is a significant and substantial business park project in Moscow, Skolkovo Park for Millhouse.

Darren Comber, Scott Brownrigg CEO has led both the project and the company’s venture into Russia. He states:

When Scott Brownrigg first presented in Russia, our portfolio of buildings primarily addressed the desire to minimise solar gain and embrace methods to avoid the heat build-up of buildings by utilising brise soleil and using enhanced coatings to the glazing. The temperature swings that the practice was used to addressing were also very different, and there was an emphasis on cooling buildings rather than heating them.

Our design attitude, primarily in considering passive techniques, was an influencing factor in the client’s selection of us in the competition to design the office scheme.

However, the thermal parameters and driving design criteria are considerably different and require building performance that cannot be reliant on passive strategies alone.

The Design Criteria for Russia

The external design criteria is in accordance with SNiP 23-01-99* Building Climatology:

For central plant, a design summer condition of 30°C db, 23°C wb is used to provide a safety margin.

The thermal performance (U-values) of external building enclosures shall be adopted in accordance with SNiP 23-02-2003: 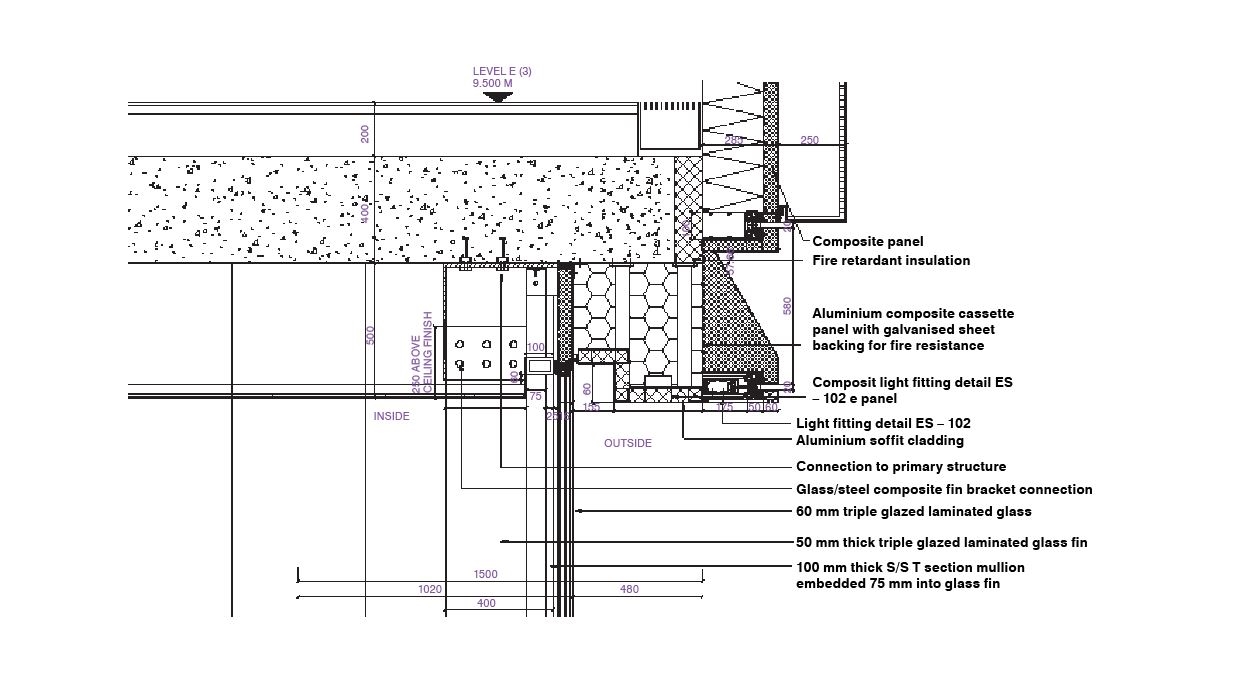 The U-values are verified in the energy efficient design. Glazing shading factor (g-value) is currently assumed as 0.4.

A triple glazed façade is required for this thermal performance.

Designing buildings in Russia presents a series of different challenges, primarily because the temperature differentiation across the year ranges between -30°C to +30°C. The usual requirement for solar shading and the desire to minimise solar gain is also not the same and there is an enhanced desire to improve the light quality within the buildings. This is primarily because the daylight in Russia is often a very flat light, it is therefore important to be able to provide as much internal natural daylight as is practical to internal spaces.

It is normal to provide triple glazing and the design criteria to be adhered to preclude certain approaches we would normally explore when designing buildings. However, in turn this has allowed the opportunity to utilise other methods, such as below ground ice storage, so it is very much a case of designing to suit a location and embracing the natural characteristics of environment to find a solution.

Other considerations which have clearly influenced the design approach, include orientation, massing and placement, as well as the everyday social and functional requirements of such huge fluctuations in temperature. The underground and continuous car park (allowing sheltered and tempered access to each of the office buildings) facilitates ease of movement in both winter and summer, there is an active plinth which does likewise, but also takes advantage of the new public realm and landscape; Muscovites want to enjoy the summer months and value the landscape.

The design of the roof was carefully modelled to take into account snow (and snow loading) and this has been developed through the detail design process.

Our design attitude, primarily in considering passive techniques, was an influencing factor in the client’s selection of us in the competition to design the office scheme.

To reduce the amount of carbon as well as the running costs of power consumed by the CHW Plant, the project utilises thermal ice storage within the basement levels to offset peak cooling loads in the summer months. 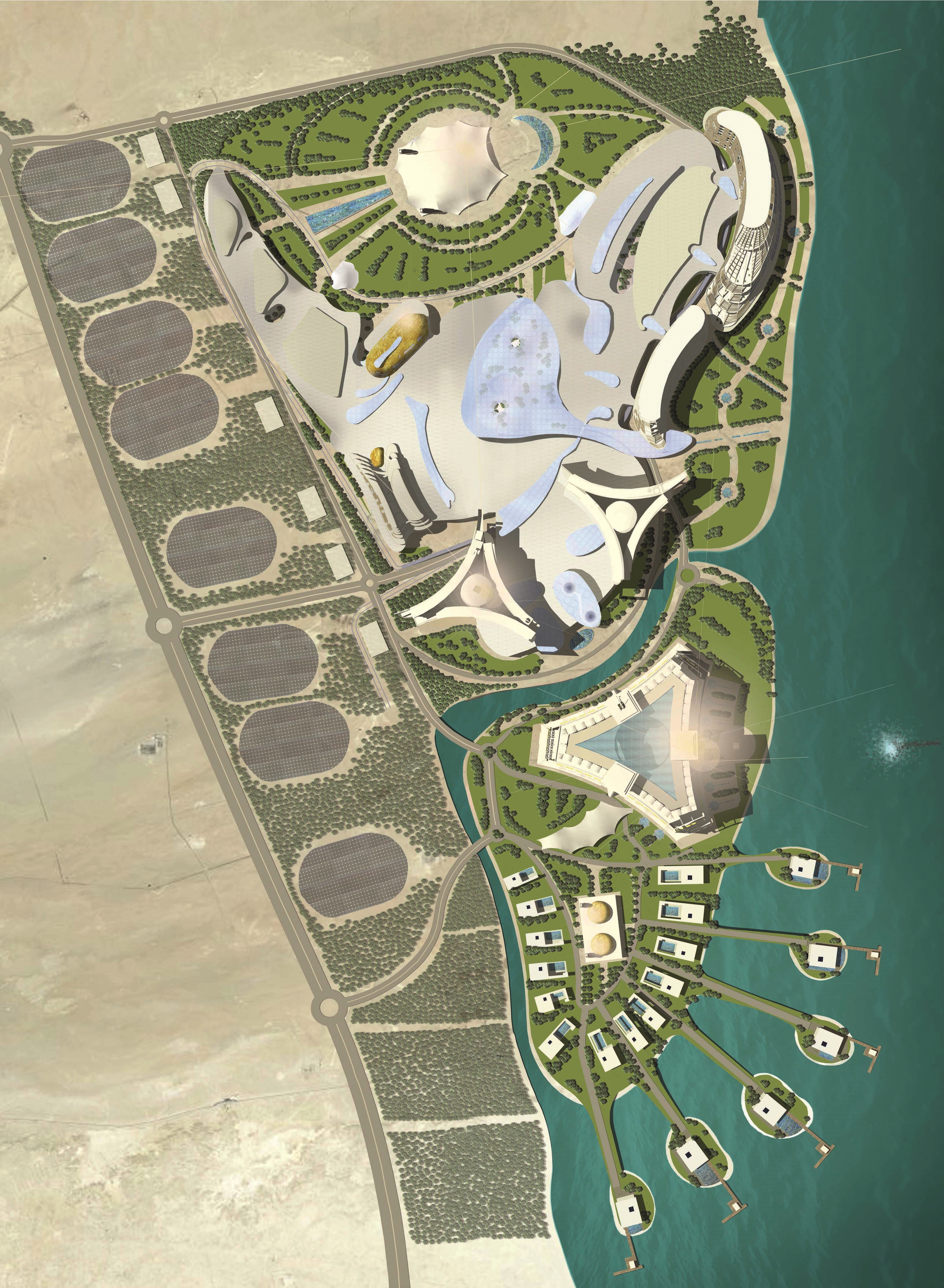 The second project is in the Kingdom of Bahrain and is a scheme for a Medical City, totalling some 5 million sq ft.

Whilst this commission was only for a masterplan and concept design, the intended response to place and environment had to be a significant influence on the way in which the proposed architecture and organisation evolved.

The design criteria for Bahrain has to deal with the extreme heat, and due to its long coast line, the associated humidity at the end of the summer months (July and August). Average temperatures in January are 17°C and in summer are 34°C, however the desert can cool rapidly in most months and a building fabric response that took this variance into account was seen as an opportunity for free night-time cooling for the appropriate six months of this climatic occurrence.

The historic precedent for shade in its most simplest form can be seen within the Bedouin tent; a roof covering with completely openable sides. It is worthy of note that in direct sunlight, the normal response to the extreme heat actually becomes counter-intuitive. We would naturally remove clothing (other than a hat for shade) but here you add layers, for the body of 37°C is cooler than the external one which can reach 52°C, therefore you want to keep the “coolth” in.

Our first design move therefore was to join all the disparate elements together under a single roof, a free form abstract of the Bedouin tent. The roof of this was conceived to offer several passive environmental design strategies, the first was to act as shade or shield. The monumental roof in concrete is covered in ceramic tiles. Here the long tradition of Arabic tile making is combined with contemporary technology. The local craft skills of making these was seen as a natural precedent for the ceramic tiles used as the heat shield on the space shuttle, so the roof reflects the intense heat of the desert sun. The second, uses a composite of cold air filled ETFE and photovoltaics. This generates energy and at the same time filters light into the depth of the plan. Within these parts of the roof are air scoops, reverse funnels which allow for the free night-time cooling in winter months.

The third is the actual form of the roof itself. The sinuous shape, together with the plastic form of the plan elements are conceived to drive cooler sea air into the depth of the plan and generate cross ventilation, pushing out the hotter air from the desert side.

The façades are heavily spatially layered. Deep civic arcades provide solar shading, where together with brise soleil and contemporary interpretations of traditional fretwork, moderate the climate from outside to in.

Within the public spaces, the traditional use of water and fountains is also used to temper the environment, both inside and out. Date and fig palm orchards are used for natural external shade and enhance the sense of well-being within the campus.

Despite all of the above, as in Moscow, orientation and fabric with passive environmental techniques cannot deal with the heat when it is at its most aggressive, or with the sand storms which gather in the desert and migrate seaward. Therefore the proposal is still required to become a hermetically sealed box at particular extremes.

To mitigate therefore as much as possible the reliance on energy for mechanical environmental systems, there are a number of ancillary design proposals. All the car parks are placed at the perimeter immediately adjacent to the main highway, and are shaded with more photovoltaics in multi-storey structures. The car then is excluded from entering the campus altogether. Instead, an internal transit system of automated (driverless) trams which follow low energy fibre-optic lines buried within the ground connect the hospitals to living spaces, to car parks, and to all the ancillary functions.

There is a central district cooling plant which uses the city’s waste and combines with a de-salination plant. 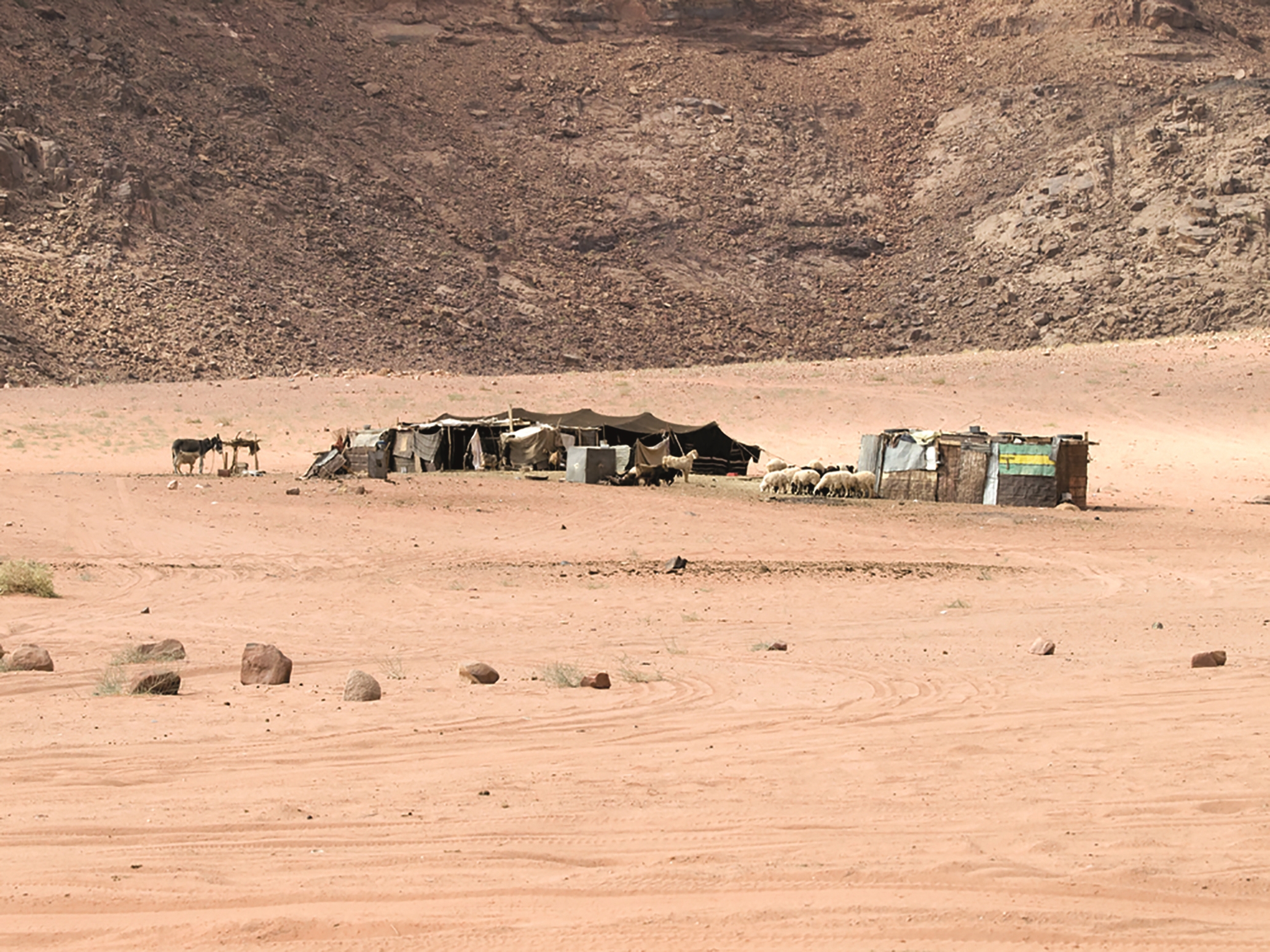